...in fact it has been quite a tasty experience. Some hints as to where we are are that there is excellent seafood to be had almost everywhere, there are lots of Tiki bars and there is also something I have not had in a coon's age: 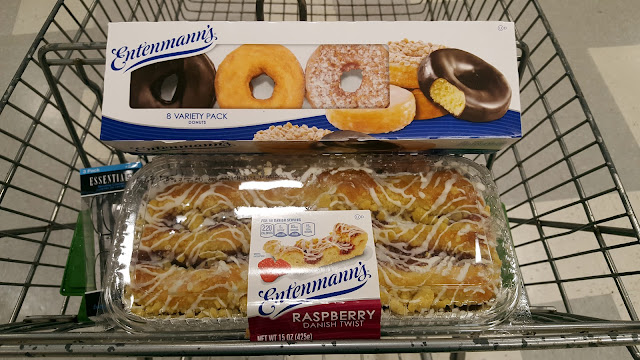 We have not had those Entenmann's yet, they are for dessert tonight when we visit a friend for a BBQ. I must say that my pie hole is watering just looking at the photo. The donuts historically were great but the Raspberry Danish Twist was exquisite as far as I am concerned. Of course, Entenmann's closed down several years ago and were essentially bought out by another company that took over their business. I am hopeful they are half as good as they were before that takeover.
Something else they have here, that they do not have in the Texarkana area, is an abundance of over the counter readers (to the left in the photo as you look at it). At least that is to say they have ones suitable for a heterosexual male to wear as opposed to ones that would make a self-respecting man (who is content with his identity) look like a fruitcake or an idiot. Everything else, that I have seen here, that is sold in grocery and drug stores, seems to be in better supply here than it is in the Texarkana area.
There is also an Einstein's Bagel shop nearby. Bagels (at least really excellent ones) are an unobtainable commodity in the Texarkana area. I had two of them for breakfast both slathered in lightly salted butter (what diet - I am on vacation - gained 3 or 4 pounds here in a week after just having lost 35 pounds). I had a sesame seed bagel and an everything bagel; not quite as good as the ones I used to get in NY but I think exceedingly better than anything I can get near where I live.
Almost enough hints as to where I am, except to say three more things: Man oh man is the water a beautiful color; the iguanas & gators are abundant (my son saw quite a few while out walking) and my son got an excellent cigar at a real cigar shop yesterday.
All the best,
Glenn B
Posted by Glenn B at 4/15/2022 03:04:00 PM

Close but we were on the other side of FL in West Palm Beach. It was nice.