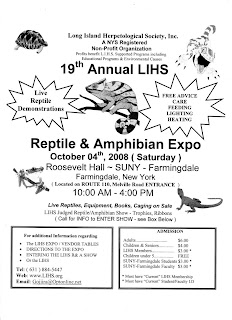 Yes folks the time is almost upon us for the 19th Annual LIHS reptile Expo. I think I have been there for all but one or two or three of them over the years. I am pretty sure I was there for the first one way back when; but if not then I was definitely there for the 2nd.

You see, keeping reptiles and amphibians has been a passion with me since I got my first Red Eared Slider turtle back when I was a mere young lad of about 8 or 9; maybe even younger. Since then herps (reptiles and amphibians) have been a passion with me. I have collected them from the wild, bought them in stores and at herp expos, traded them with friends, adopted them from other keepers who could not keep em any longer, kept them in captivity, and bred them. Why? I guess because when I was a young kid I could not have a dog or a cat - house rules. Somehow though my mom allowed in that first turtle that my Uncle Ken let me pick out at a pet shop. Both my brother and I got one, but only I was hooked and became a reptile and amphibian junkie for life. Not a bad addiction though as things go. My passion has had me see things out in nature, heck even in the middle of cities, that other folks don't know even exists; and I have met and made the acquaintance of lots of good people through my pursuit of this hobby. Heck I have even made some great friends like those at the LIHS.
If you live on Long Island, or if you are close to the area, and you have any interest in these magnificent creatures at all, why not stop by our show on October 04, 2008 at SUNY Farmingdale, and make sure to bring along the kids. It will be held from 10AM - 4PM in Roosevelt Hall. The admission price is well worth it, there should be more herps on display than you would see at the Bronx Zoo Reptile House in a visit there. There are herps and herp keeping accessories for sale, and there is also a judged show. By the way, anyone can enter an animal into the show, you do not need to be a society member. Prizes include ribbons and some pretty impressive trophies. Who knows, maybe you will become a herp junkie too.

If you want more info about the show, go to this link: http://www.lihs.org/files/events.htm .