Damn - I Am Hankering For a Range Trip

The local indoor range, a few miles from my place is open; I know because I picked up a gun there and did the transfer earlier this week or was it Saturday last week. Whenever, they were open. As I was waiting for the paperwork to get done, a range officer went into the range to help another one fix a target hanger that I guess had come off the track or whatever. As they were working on it, them both a yard or two forward of the firing line, there was a guy on the first point putting his gear away. I watched on their surveillance monitor over the counter. I mentioned to the owner that the guy was handling his pistol while her employees were downrange. She looked and in essence said 'meh'; I watched some more and watched him load the pistol while kneeling on one knee and bent over it like no one would see him do it. I mentioned that he was loading it, she mumbled something and did not even glance up at the monitor. I don't think I'll be shooting there.

As for the outdoor range I go to, it's as bad or worse but sometimes no one else is there and then it's usually a good day for me. I may drive there tomorrow and shoot if I am the sole person there. Since it's in AR, it is probably open.

A Little Excitement At The Apartment Complex Last Night

I was walking the mongrel Skye last night and heard some banging noises like someone kicking or pounding on a door or maybe the dumpster. So, I turned around to take a look and saw a guy run away from the apartments. A very short time later, heard much the same thing and turned to go over that way to see what was going on and again saw a person, looked like the same one, run away from the apartments. This time though he hopped in a dark colored car a little ways up the block and they drove off. I did not see any damage anywhere and just kept walking Skye.

We cut between our complex and one next to it and just my luck, there was the car (looked black in that light) parked in its lot, the car that I had just seen drive away. One guy got out, saw me, said something to me like what are you looking at. Another guy got out of the driver's side, looked me over and then one or both said something I did not understand and they got in the car and drove away. Skye and I walked though the parking lot to grassy area, and as best I recall across the street to just outside the local park. Soon, we went back the way we had come. Well, here comes that car again, driving by and into the lot of our apartment complex, they stopped in front of me (they may not have seen me at that point) and I stopped waiting to see what would happen. Then they just slowly drove away.

We walked through the parking lot and headed across the street again, this time into the park and walked around for ten minutes or so. As we were walking in the driveway of our complex, back to our apartment, I heard what sounded like a gun shot, it was followed by two or three more (I am pretty certain it was another three). I called 911.

Gave it a few seconds and peeked around the corner of the buildings. Saw a small crowd and a guy standing atop an orange car. This was that car. 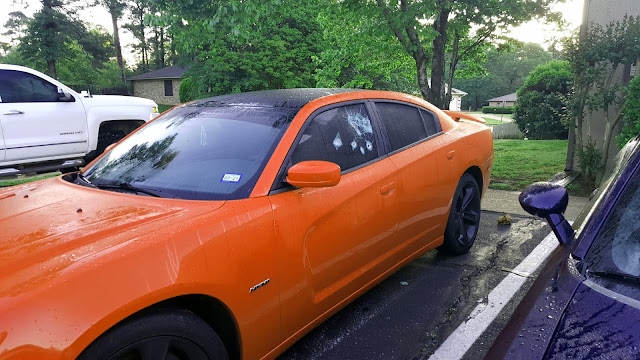 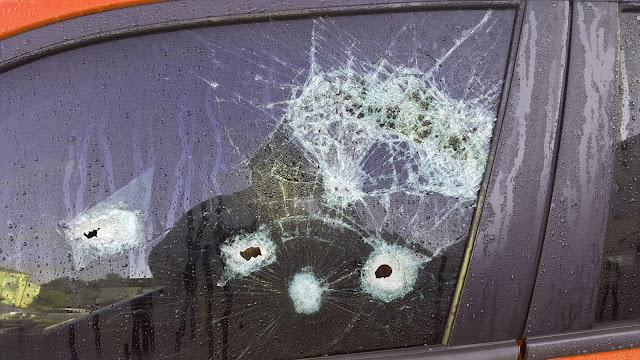 Guy who was atop the car seemingly owned it. Saying something to the effect he had not been in his car when it was shot up and some other seeming blather.

The police came by soon and interviewed some people and me too. Told them what I had seen and described the other car as best I could. They asked me to look at some pics later, showed me pics or video that came from someone's home surveillance system that overlooked our parking lot. A black car looking something like the one I had seen was in it but I could not say for sure it was the same car - the pics were supposedly from the time at or right after the shooting.

I may need to look for a new apartment or maybe a house rental out in the country really soon.