...I hope that there is indeed an afterlife in which you have found sweet bliss. 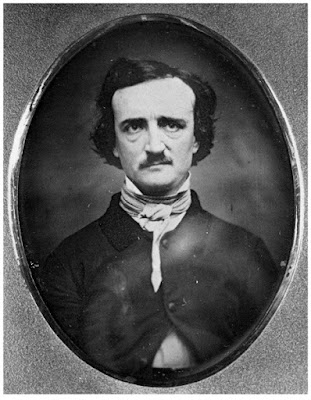 Of course, Poe was also author of macabre tales and horror stories, a novel and most certainly of ,scores of excellent poems. Of all of his poems though, one of his briefest is my favorite; it is the last version of a poem that had a couple or few preceding versions:

I heed not that my earthly lot

Hath — little of Earth in it —
That years of love have been forgot
In the hatred of a minute: —
I mourn not that the desolate
Are happier, sweet, than I,
But that you sorrow for my fate
Who am a passer by.

If I could choose what was to be on my tombstone, it would be this poem, there for anyone to see and read who stopped by to visit for a moment at my gravesite.

Poe has been my favorite American author since I was in grammar school. He is tied with, or has a slight edge over, J.R.R. Tolkien and Douglas Adams as my favorite writers in the world.

A hat tip to Eric SWG for the reminder that today was Poe's birthday.

Are You Ready For Tomorrow And The Leftist Whackos?

I am ready for whatever. Just saying, I too have some peanut butter and...

...or I suppose I should say damn the lazy bastard that left them fouled. That guy would be me. Pulled out a couple of handguns to bring upstate this weekend for some shooty goodness and realized two of them are dirty filthy and fouled - one would be one of my two Beretta 92FS pistols and the other my Remington 1911 R1. Cleaning will commence one my grandson up on the third floor - sleeping for the night. I may like the aroma of Hoppe's No. 9 but my wife does not and I agree the little one should not be subjected to the fumes.

At least the shotgun I am bringing along is already clean. That is my Remington 870 Express magnum with black synthetic stock. I had it for sale on GunBroker at a starting bid of $275 but the only guy interested was a police officer in CA and as per my terms I do not sell or ship to anyone in CA. Yes, I know, that is restrictive but my sale - my rules and I do not need to deal with a state like CA. I also do not sell or ship to folks in New York City, Chicago, Washington D.C., Massachusetts, U.S. military addresses such as APO and FPO, or anywhere where illegal. I did agree to sell to one person just recently who was in Alaska.  Even though he bid, and that was a violation of my terms, I took his word for it that it was an honest mistake because it was only his second time bidding in an auction on GunBroker and his first auction listed excellent feedback for him.

I will never do that again, that is sell and ship to someone in AK. That is not because there were any problems with the buyer - he seems like a gentleman. There was quite a delay in getting a copy of the required FFL from his dealer who at first refused to email it to me saying he had to fax it. My fax is not in good working order so I told them to mail it or email it and sent a copy of correspondence I had received from the BATFE saying emailing an FL is quite legal. I eventually got the FFL, via email, and then sent the rifle via UPS. That shipment turned into a royal pain in the arse. The rifle was being shipped to Barrow, AK.  Barrow is - as far as I am aware - the northernmost town in the USA. The rifle I shipped there was supposed to go 2nd day air but UPS shipped it ground (which I think had an air component anyway but not 2nd day delivery). That probably happened because the UPS computer system kept saying the delivery address did not exist instead of what it SHOULD have said - that the delivery address was in a remote area and any delivery would be delayed (at least in part) because of the location (and thus there was no second day air service). So, the UPS guy redid the address and input the address manually and it still would not take. Then he told me he was deleting everything and starting again. Well, I guess he forgot to redo it as 2nd day air (he essentially admitted that the next day). I only realized it went ground when UPS sent me an email saying their had been a change to the delivery date. I went back and spent about an hour and a half trying to get them to change it to 2nd day air, and the UPS guy said he accomplished that (after an awful lot of trying on his part including about an hour on the phone with a UPS representative in the Philippines - yes he had to try that way first) and then him apparently getting it done himself in their computer system but somehow it still went ground. All in all, it went days past the scheduled delivery date and it finally arrived yesterday. Have not heard back from the buyer but I trust he will like it because it should be just as described unless UPS damaged it. I am praying this not turn into more of a Magilla than it has been already.

But I digress, so let me get back to the 870 I had up for auction. I decided to pull the auction and bring the 870 upstate with us this weekend so we can have a blast with it and with the other 870 Express Magnum (with laminated stock) I gave to my son recently. I figured since it was not selling, after several weeks on GunBroker, I may as well enjoy shooting it (damn the partially torn rotator cuff). At least the shotgun is not a fouled mess like the two pistols. As for my original 870 Express, it will remain at home so my wife can protect the homestead in case of Zombie attacks or similar disturbances.

I guess I should add, once I get home from the weekend upstate, I need to do some regular gun maintenance and clean the whole kit and caboodle. It's shameful that I put those away fouled and left them that way for at least a month or three.

I look forward to the beginnings of a revived healthy, prosperous, great and united nation arriving tomorrow!

Would It Be Seen As Wrong By Leftists...

...for a conservative or libertarian American citizen to wish that, tomorrow during the inauguration, Obama was to pull out a gun and attempt to assassinate Trump just before he is sworn in AND that Trump wrestles Obama to the ground and does a gun takeaway and then Obama bawls like a baby?

I am not wishing but just wondering. Why wonder about that? Well, I am fairly convinced that many leftists are wishing for almost that same scenario, or at least would applaud it, but only with it ending in Obama firing on Trump and then announcing a coup and declaring himself the Obamessiah For Life. Leftists are that fucked up as far as I can tell.

Protestor Lights Himself On Fire - ...

...well, almost maybe, kind of, sort of - not really. Anyway, he claims that is what he was trying to do to protest Trump(?). More here, with video.

Frigging arsehat snowflake leftists can not even get it right even when trying to light themselves afire. Or is it that they are all just bullshitters when it comes to actually doing what they say they are going  to do or tried to do! Maybe more than a bit of both.