Last gun show I went to was in Benton, AR a couple of weeks ago. They had lots of older guns but the prices were out of this world. 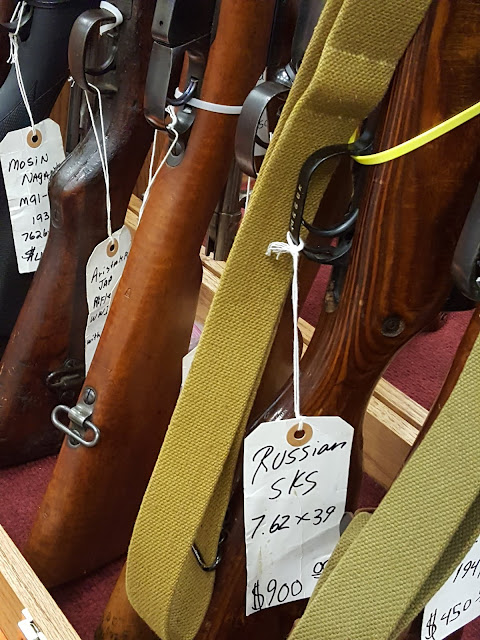 Look at the tag on this nice but nothing special (as far as I could tell) Russian SKS; yet, they were asking $900.00!!! That is crazy and anyone paying that much would have to be insane IMO.

Then look at that Mosin Nagant 91/30 for which you can see only the first number of the price. Four hundtrd anything is way too much for one of them.

While they probably will not get those amounts, that they are asking that much is likely a sure sign someone will pay too much.

Classic Firearms is selling SKS's right now for 299$. I don't know if that is still on, but if a person wants one, that is more than reasonable.
I have bought from Classic and have had good luck with them. But in fact, I have had good luck with all the companies that I have ever ordered from online. I read stories of those who have problems with either the manufacturers or the mail order companies, be they Classic, Grab a Gun, Locked n Loaded, CDNN, Cheaper than Dirt, etc. or Taurus, Ruger, ATI, or even, gasp, HiPoint.
I actually have a Ruger SR 9C coming from Locked N Loaded, which I ordered on Friday, the carrier tried to deliver it on Sunday, and again today, but the dealer is closed on Monday. So it was in my town in two days, during the Christmas season, not too shabby. For a price of 259$, which is less than the dealers are selling the same gun in .22lr in. That's right the SR .22 is more than my 9mm of the same model.
My daughter had that .22, which I have shot, and it was very nice. I hope mine is that nice. Her's was super accurate also.
In any case, have a Merry Christmas, and a fantastic New Year.

I find myself resisting gun shows just fine these days. Haven't been buying guns for that long, but even in that short time under a decade they've evolved from collector/enthusiast shows to something else. Not long ago a small one was about a third knives and aromatherapy, fudge and jerky. Waste of admission. I refuse to go to the big regional, every other month show held in a convention center. Too many people, and I've heard tell of the "Northern Virginia tax" where dealers jack up prices due to a larger than usual market of very rich shoppers. I'm down to the state collector's show twice a year and usually buy something from private sellers. Never a milsurp. I think a lot of the prices are driven by YT video and video gamer popularity in a younger crowd. It was saddening to hear Othias say that he's prepping to do a shotgun series and as a result expects to see scarcity and drastic price rises in old guns.